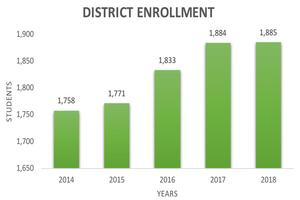 Following continuous climb in enrollment, numbers begin to level out at 1,880-plus students
The total enrollment in Evergreen Park School District 124 is 1,885 students for the 2018-19 school year, up more than 7 percent over the past four years.
While enrollment increased by only one student compared to last year, overall D124 has grown by 127 students since the beginning of the 2014-15 school year.
Four of the District’s five schools have seen double-digit increases in student enrollment since sixth grade was moved to Central Middle School in 2015.
CMS is up 94 students (15 percent) since the start of the 2015-16 school year, Northeast School’s enrollment has risen by 14 students (4 percent), and Southeast and Southwest schools have each seen an increase of 10 students (3 percent). Northwest School’s enrollment has dropped by 9 students (3 percent decrease) over the same time period.
Four of the District’s nine grade levels are currently experiencing their highest enrollment figures over the last five years, and likely beyond. Those classes include seventh grade at 219 students, second grade at 214 students, eighth grade at 211 students, and fifth grade at 210 students.
Kindergarten has the lowest enrollment of 162 students, followed by first grade at 175, third grade at 178, fourth grade at 206, and sixth grade at 208.
While enrollment continues to rise, the District has also added several new classes and programs that require more space at each of the schools. While this has been a challenge at times, D124 has found new and creative ways to best utilize its space.
Additionally, the District has been able to keep its average class sizes at around 19 students per classroom.