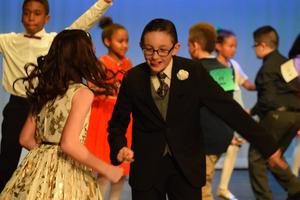 Dancers from all five elementary schools participated in a district-wide Dance Off on Nov. 15 at EPCHS

Fifth graders from all four Evergreen Park School District 124 elementary schools put their dancing skills on display during a special Dance Off on Nov. 15.

The event was a culmination of months of practice from the students, who had been working with the organization "Dancing with Class" for the past several months to learn the dances. During the event, students will had the opportunity to dance in the following styles: Swing, Merengue, Foxtrot, and Paso Doble. Each school won an award for outstanding achievement in one of the four dances.

The goal of the Dance-Off was to motivate each student to perform to the best of their ability, while emphasizing the joy of the learning process at all stages of the program. The Dancing with Class program celebrates each child while also giving them the opportunity to experience the pride that comes from belonging and contributing to a team.